The Troika’s Policy in Greece: Rob the Greek people and give the money to private banks, the ECB, the IMF and the dominant States of the Eurozone

October 18, 2018
On 20 August 2018, the Greek government of Alexis Tsipras, the IMF and the European leaders celebrated the end of the Third Memorandum.

On this occasion, the major media and those in power spread the following message: Greece has regained its freedom, its economy is improving, unemployment is on the decline, Europe has lent Greece 300 billion and the Greeks will have to start repaying that debt in 2022 or in 2032.

The main claims are completely unfounded as Greece remains under the control of its creditors. In compliance with the accords that the Alexis Tsipras government signed, the country must imperatively achieve a primary budgetary surplus of 3.5% which will force it to continue brutal policies of reduction of public spending in the social sector and in investment. Contrary to the dominant message that Greece will not begin to repay its debt until some time in the future, it should be clearly understood that Greece has been repaying considerable amounts constantly all along to the ECB, the IMF and to private creditors, and this prevents it from responding to the needs of its population.

Part 15 - Lies put forward by the IMF German, French and Dutch Executive Directors to persuade their colleagues to enforce a first Memorandum of Agreement

During the decisive meeting of the IMF board on 9 May 2010, the German Executive Director stated: “I can inform Directors that German banks are considering some support to Greece, but I also have to stress that this is on a very voluntary or only a voluntary basis. It is not a debt restructuring; it is a voluntary action. I have no firm information yet, but what I know is that these banks basically want to maintain a certain exposure to the Greek banks, which means that they will not sell Greek bonds and they will maintain credit lines to Greece.”

The French Director made a declaration of similar tenor: “There was a meeting earlier in the week between the major French banks and my Minister, Ms. Lagarde. I would like to stress what was released at the end of this meeting, which is a statement in which these French banks commit to maintain their exposure to Greece over the lifetime of the program. [...] So, it is clear that the French banks, which are among the most exposed banks in Greece, are going to do their job.”

Lastly, the Dutch Director declared: “The Dutch banks, in consultation with our Minister of Finance, have had discussions and have publicly announced they will play their part in supporting the Greek government and the Greek banks.”

In fact, as several executive directors of the IMF had suspected and as the Truth Committee on Greece’s Public Debt reported, the real intention behind the agreement was to give the strongest banks of the Euro Zone time to dispose of their Greek securities.

The graph below shows clearly that French, German, Dutch, Belgian, Austrian and Italian banks and more disengaged from Greek bonds through 2010 and 2011. 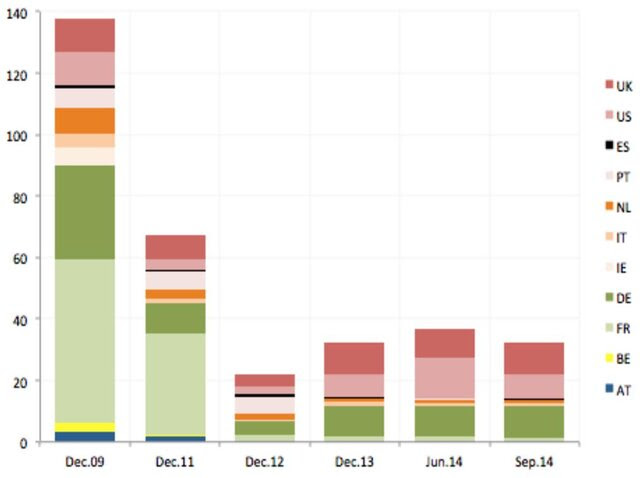 As indicated above, the ECB with Jean-Claude Trichet at its head directly helped them to get rid of Greek securities as it massively bought them at a high price and thus protected them against the consequences of their nefarious actions in Greece.

July 05, 2020
An estimated $24 billion of Venezuelan public money has been looted, and the Trump administration has used at least $601 million of it to construct a militarized wall on the US-Mexico border.
by Ben Norton
Part 2 - Right-wing opposition upset Trump didn’t give Guaidó gang all stolen Venezuelan money
The Trump corruption scandal has been almost entirely ignored by mainstream corporate media outlets. Univision buried its own scoop deep in a report that advanced the talking points of Venezuela’s US-backed right-wing opposition and referred to the elected government of President Nicolás Maduro as a “widely repudiated regime.”
Univision, the largest corporate media network in the United States that focuses on Latino issues, is owned by billionaire-controlled private equity firms, one of the most prominent of whom is the Israeli-American oligarch Haim Saban.
Based in Miami, the de facto capital of the Latin American right, this massive media conglomerate acts as a mouthpiece for conservative f…
Post a Comment
Read more

July 07, 2020
The Grayzone
Red Lines host Anya Parampil speaks with Chicago-based activist and author Frank Chapman about his life story as well as his vision for community control over the police.
Frank has been in the struggle for more than 50 years— beginning with his time as a young man serving a life sentence in Missouri state prison. While incarcerated, Chapman became a self-taught radical, eventually leading a successful fight to desegregate Missouri state prisons and cchieve his own freedom. Chapman shares his remarkable story his memoir, "The Damned Don't Cry, Pages From the Life of a Black Prisoner & Organizer".