January 08, 2018
Joel Whitney is a co-founder of the magazine Guernica, a magazine of global arts and politics, and has written for many publications, including the New York Times and Wall Street Journal. His book Finks: How the C.I.A. Tricked the World's Best Writers describes how the CIA contributed funds to numerous respected magazines during the Cold War, including the Paris Review, to subtly promote anti-communist views. In their conversation, Whitney tells Robert Scheer about the ties the CIA’s Congress for Cultural Freedom had with literary magazines. He talks about the CIA's attempt during the Cold War to have at least one agent in every major news organization in order to get stories killed if they were too critical or get them to run if they were favorable to the agency. And they discuss the overstatement of the immediate risks and dangers of communist regimes during the Cold War, which, initially, led many people to support the Vietnam War.

James Jesus Angleton was part of this post-OSS group that understood how important spying and covert ops had been in World War II. And from there, he makes all kinds of terrible mistakes. He and his group believed essentially that they needed to do better propaganda than the Soviets did, and one of the ways that they thought they could do it better was to do it subtly and, you could say, secretly. 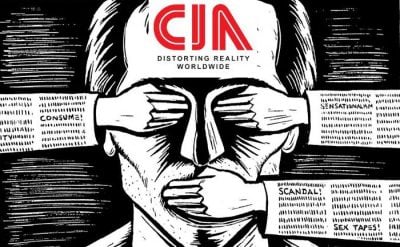 So, when this program is threatened with exposure in ‘64, ‘65, ‘66 and ‘67 through various sources like Ramparts and The New York Times, this privilege of secrecy that they enjoyed was not something that they were willing to give up. So you have something that is described as relatively benign, this funding of culture through the Congress for Cultural Freedom, a funding of student movements through the National Student Association, the funding of labor unions that would be less communist-influenced than the communist-dominated ones that they presumed were out there. These were seen as benign answers. They were reactions to Soviet penetration. So, secrecy is a key to making them work.

So, even if you want to make the argument that, for instance, the Congress for Cultural Freedom never censored its magazines–which I think has been severely disproved; they did censor. Even if you wanted to say that they published all sorts of great writers–which clearly they did; that was part of the subtlety of it and part of the brilliance of it, and part of the soft-power charm of it. Even if you wanted to say all that, when the secrecy is exposed by honest accounting in the media, the fourth estate, the adversarial media of American bragging around the world, they are so attached to their secrecy, and so upset, the CIA group led by people like Angleton, that they commit something that is about as anti-American as anything in our system. Which is: more secrecy, more media penetration to the point of penetrating, first, the anti-Vietnam War press; second, the student, the college student newspapers and press; the alternative, so-called, press. Which essentially is a license to do what they did later. So, where Ramparts was penetrated, leads to Operation Chaos, presumably; that leads to Operation Mockingbird in the seventies.

By the time we have Carl Bernstein reporting on Operation Mockingbird, and John Crewdson reporting on its international equivalent in the New York Times–Bernstein in Rolling Stone–you essentially see the CIA trying to have at least one agent at every major news and media organization it can do in the world.

And Crewdson reporting in the Times at the end of 1977 essentially says that they had one agent or contract agent at a newspaper in every world capital on Earth. They could get stories killed or get stories to run that portrayed the CIA’s views in a favorable way, or kill them if they did not.