Russia is about to become the first state that will issue its own CryptoCurrency. While Vladimir Putin implied that CryptoRouble comes as a natural attempt by Russia to participate in rapid developments in the sector of monetary and commercial transactions, it is quite probable that there are other reasons too. At the time where Russia struggles to overcome continuous sanctions by the West and BRICS seek complete independence from the Western monetary monopoly, the move could contribute significantly towards the achievement of both of these goals. 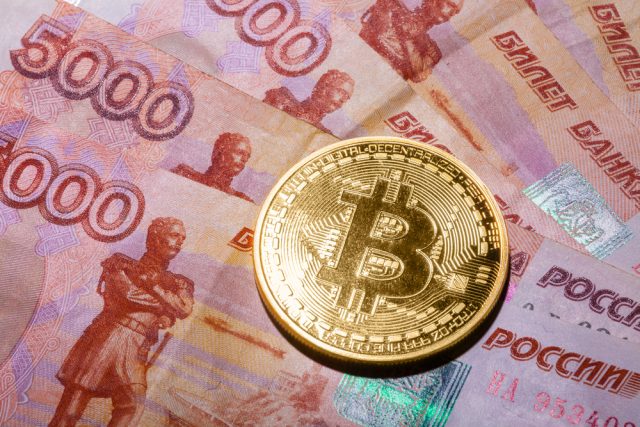 Russian President Vladimir Putin has made history today, when he endorsed the creation of a soon to be unveiled CryptoRouble, the world’s first cryptocurrency endorsed by a state. [...] The CryptoRouble is being worked on at the moment and should be available soon, although a precise timeline is not yet available.

While advocates of autonomous cryptocurrency exchange will almost certainly adopt the traditional ultra-libertarian line that any government regulation into cryptocurrencies makes them scarcely different from using traditional currencies in the online domain (Paypal for example), long time advocates of cryptocurrency in the retail and wholesale sector will almost certainly look with interest to this new development. [...] if in the eyes of the Russian government, a CryptoRouble is as legitimate a currency as the Rouble, it will allow wholesalers, retailers and possibly even independent financial traders to use the CryptoRouble to avoid the sanctions against Russian banks which their own anti-libertarian western governments have imposed. Additionally, if the CryptoRouble becomes easily convertible to popular western originated cryptocurrencies such as Bitcoin, it would solve the problem of Bitcoin users being ‘shut out’ of the Russian market. All one would need to do in order to engage in transactions with Russian businesses using a cryptowallet, would be to digitally exchange one’s Bitcoins (or any other existing cryptocurrency) for a desired amount of CryptoRoubles. The aforementioned process would generally take the same amount of time or even less than a traditional online bank transfer.

During September’s BRICS Summit in Xiamen, there was a great deal of discussion regarding the establishment of a cryptocurrency for the BRICS nations (Brazil, Russia, India, China South Africa) and their partners. Such a coin would have all of the advantages of the CryptoRouble with the added benefit of instant legitimacy and even desirability across some of the world’s most dynamic and growing economies. It could also facilitate easier money transfers between BRICS members. This would be particularly helpful for Chinese businessmen who often have trouble getting large sums of Yuan out of the country in single transactions. A BRICSCoin, if based on the Russian security net could plausibly alleviate similar existing Chinese concerns about cryptocurrencies. As China has begun trading oil futures contracts in Yuan which can be converted to gold at the Shanghai and Hong Kong gold exchanges, one could foreseeably be looking at a BRICScoin that would effectively be backed by gold, in certain instances.

The move may help Russia avoid the hard sanctions imposed by the West through the 'back door' of the CryptoCurrency market. Russia may access Western markets in the future through the rapidly increasing number of individuals who will use Bitcoin and other CryptoCurrencies.

Previously, we had the first serious attack against Bitcoin by the Western banking cartel through JPMorgan CEO Jamie Dimon, which was a serious indication that Bitcoin and other CryptoCurrencies could become a real threat against cartel's monetary monopoly, which gives significant power to the mega-banks of the West, even up to the point to 'design' major financial crises.

As has been described, Dimon's attack could be related to a recent statement made by the Head of the Russian Direct Investment Fund (RDIF), Kirill Dmitriev, that the BRICS are considering to create their own CryptoCurrency for the purposes of global commerce.

Such a move could help BRICS to decouple economies from the Western neoliberal monetary monopoly, even faster. With the technology of more powerful computers in close future that could 'mine' CryptoCurrencies at much faster rate, the number of people who will choose to abandon traditional currencies may rise rapidly. Those who will set-up such a de-centralized financial system, will gain a great advantage against the obsolete system of traditional currencies controlled by central banks.

Even entire countries may choose to jump into the new system, in order to escape from the monopoly of the Western hard currencies. The most characteristic example is Greece. Many in Greece are considering Bitcoin and other alternative currencies as a solution against the monetary dictatorship of the ECB.

Indeed, Russia seems that is moving fast towards the implementation of such plans.

However, there are currently some political barriers against the prospect of a BRICS CryptoCurrency in the close future. These are related mainly to Brazil and the constitutional coup against former president Dilma Rousseff. Right-wing, Pro-Washington Michel Temer is expected to sabotage from inside such efforts by the BRICS and this will prove further that the US is terrified with the prospect of a BRICS CryptoCurrency.

Petrodollar already struggles to maintain its dominance as many countries have chosen to 'revolt' against it and proceed in major transactions with domestic currencies, or suggest such an alternative. Latest example, Venezuela.

As the BRICS bloc grows economically quite fast, the prospect of a BRICS CryptoCurrency will contribute to the quicker demolition of dollar domination. There is a deeper reason for which the US empire is terrified in such a case. Since the early 70s with the abolition of the gold standard, dollar became the dominant currency in global scale. This fact permitted the US financial-military-industrial complex, expressed by the neocon/neoliberal ideology, to design economic and military wars in every corner of the planet to maximize its power and profits. All it needed was just machines printing dollars. The rest was the easy part.

Therefore, the prospect of a global economy flooded with decentralized CryptoCurrencies and other CryptoCurrencies issued by a major rival bloc, will become the worst nightmare for the US empire and its Western allies.

As one can understand, the CryptoMarket anarchists have nothing to fear. A CryptoCurrency issued by BRICS, or some member-states, or even other countries separately, will not be a threat for the decentralized nature of the rest of CryptoCurrencies. On the contrary, it will give them a significantly wider field and greater opportunities for all kinds of transactions inside a dynamically growing economic bloc which, if nothing else, does not rely on wars and destruction to maintain its dominance.

May 20, 2021
The Grayzone   In the feature-length documentary film "Killing Gaza," journalists Dan Cohen and Max Blumenthal documented Israel’s 2014 war on Gaza.  Yet this film is much more than a documentary about Palestinian resilience and suffering. It is a chilling visual document of war crimes committed by the Israeli military, featuring direct testimony and evidence from the survivors.
Post a Comment
Read more

May 21, 2021
Corruption and supposed efforts to reduce it have become a neoconservative weapon of choice with which to operate the controls on the funding sluice gates to acolytes of the U.S.-led international neoconservative empire.   by Oliver Boyd-Barrett   Part 5 - Poroshenko and Zelensky   Ukraine’s two presidents since the 2014 coup, Petro Poroshenko (2014 to 2019) and Volodymyr Zelensky (2019 to the present), each started with strong support that quickly waned. The country has scarcely improved. Gross National Product peaked in December 2013; unemployment has increased from 7% to over 10%; Ukraine remains the second poorest country in Europe per capita. Corruption, the supposed key force behind popular support for the elections of both Poroshenko and Zelensky, continues to be rampant. Kiev’s policies of stand-off with Russia have been dramatically counter-productive and have deprived Ukraine of Crimea and control of major industrial areas of the Donbass. Some 14,000 lives have been taken, 1.
Post a Comment
Read more

May 22, 2021
Under cover of the pandemic, Greece’s right-wing government has passed a slew of new measures to benefit the wealthy at the expense of workers, while massively expanding police powers. On the back of a decade of austerity, the latest laws are set to transform the country into a client state and playground for foreign tourists.   by Matthaios Tsimitakis/Mihalis Panayiotakis    Part 3 - Losing Control For more than six months now, practically all of Greece has been under strict lockdown and under curfew. Despite this, a deadly second wave mostly affecting the country’s north hit in the winter, and a third wave is now ravaging Athens, home to almost half the Greek population. Vaccination numbers remain relatively low due to the disastrous handling of vaccine procurement deals by the EU. Even now, the pandemic’s intensity shows no signs of abating. But even with the lockdowns — which offer diminishing returns and feed economic and psychological anguish — the health system remains on the ed
Post a Comment
Read more

As the Left wins big in Chile, neoliberalism is about to suffer another decisive blow

May 26, 2021
globinfo freexchange   Sepúlveda Allende, a grandson of Chile’s legendary socialist President Salvador Allende, spoke with Ben Norton about the historic May 15/16 elections in which left-wing and independent candidates won two-thirds of the seats for a convention to rewrite the constitution, which dates back to the military dictatorship of Augusto Pinochet.   Allende described the political situation in Chile after the fall of Pinochet's brutal regime. This is an interesting period because it  proves that what happened in the entire West, happened in Chile too.  As he pointed out: When the dictatorship ended, there was a kind of alliance made between the parties that historically had represented certain parts of the old left, like the Socialist Party of Allende. Another that was newly formed in that moment, which had not existed before the coup, called the Party for Democracy, which had (ex-President) Ricardo Lagos, and had a lot of power in that moment. There is also the C
Post a Comment
Read more

May 16, 2021
Under cover of the pandemic, Greece’s right-wing government has passed a slew of new measures to benefit the wealthy at the expense of workers, while massively expanding police powers. On the back of a decade of austerity, the latest laws are set to transform the country into a client state and playground for foreign tourists.   by Matthaios Tsimitakis/Mihalis Panayiotakis    Part 2 - Pandemic Politics Since the start of the pandemic, greatest threat facing the country has been the paltry state of Greece’s public health system, a product of the troika-mandated austerity programs. With knowledge of the health system’s weakness, yet refusing to invest in strengthening it to reach basic EU standards, the Greek government opted instead for the rhetoric of national emergency. This allowed it to shut down most public activities last spring in the early stages of the pandemic. The lockdown yielded positive results; with people staying indoors, Greece’s death toll during the first wave remaine
Post a Comment
Read more

May 23, 2021
Through his hallowed foundation, the world’s de facto public health czar has been a stalwart defender of monopoly medicine.  by Alexander Zaitchik Part 3 - The extent and ways intellectual property posed barriers to ramping up production Technically housed within the WHO, the ACT-Accelerator is a Gates operation, top to bottom. It is designed, managed, and staffed largely by Gates organization employees. It embodies Gates’s philanthropic approach to widely anticipated problems posed by intellectual property–hoarding companies able to constrain global production by prioritizing rich countries and inhibiting licensing. Companies partnering with COVAX are allowed to set their own tiered prices. They are subject to almost no transparency requirements and to toothless contractual nods to “equitable access” that have never been enforced. Crucially, the companies retain exclusive rights to their intellectual property. If they stray from the Gates Foundation line on exclusive rights, they are
Post a Comment
Read more

May 25, 2021
Double Down News   From death in Gaza to racism in the West, Lowkey exposes a very dark side of Israel.
Post a Comment
Read more