Social Democrats' classic turn to save themselves and trick the masses ... again!

The chairman of the Social Democratic Party of Germany (SPD), Martin Schulz, made recently a quite surprising statement concerning the German minister of finance, Wolfgang Schauble, and Greece:

"Schauble is largely responsible for imposing the 13th pension cut. And while thousands of families are plunging ever deeper into poverty, Schauble records at the same time big profits from the interest paid by Greece for aid loans," said the social democrat chancellor Martin Schulz during presentation of his positions in view of September's elections ... 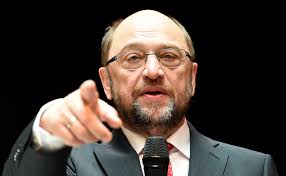 After seven years of orchestrated destruction against Greece by the neoliberal priesthood, suddenly, Martin Schulz decided to adopt what the establishment apparatus could name today as 'populist' rhetoric. Does that gives the signal to the social democrats around Europe to make a turn of 180 degrees? Probably yes, and it could be explained in many ways.

After the collapse of the social democrats in the second eurozone economy, France, and the huge political vacuum created by the unprecedented levels of abstention, the social democrats around Europe start to realize that aligning completely with the neoliberal positions, simply doesn't work.

It is characteristic that in Greece, even if the socialists of PASOK refuse to drop the neoliberal thinking, they start to distance themselves from the other key party of the establishment, New Democracy (once populist, now neoliberal right). They were partners in governing after crisis hit Greece in 2010, but now, it appears that the socialists start to remember some of their old rhetoric.

Why the chief of the European social democrats, Martin Schulz, decided now to send this signal to the rest of his ideological counterparts around Europe?

First reason, and most direct, probably because he doesn't want to have the luck of his counterparts in France, Greece and elsewhere. He knows that sticking so faithfully on the neoliberal 'rationalism' may bring more damage to his party, rather than help it recover.

Second reason, and not so obvious, probably because he took the green light by the establishment to change positions, simply because the neoliberal experiment in Greece is almost completed.

So, now that the elites secured the desirable conditions towards Feudalism 2.0, the social democrats are 'permitted' to wear their socialist mask. It's only another trick. Their mission is to attract the voters who have been disappointed by the neoliberal establishment, especially the most moderate who have chosen to abstain from the electoral process. Therefore, their mission is to restrict the potential of the 'radical' left, and close the dangerous and unpredictable political gap created by the unprecedented figures of abstention.

For seven years now, the socialist hypocrites were watching the destruction of Greece, fully aligned behind the establishment. They were just reproducing the known lies and propaganda to distract people from the real criminals, responsible for the crisis. Therefore, it is very doubtful whether these hypocrites could trick the masses ... again.

September 05, 2020
globinfo freexchange
In June we wrote that various types of far-right armed groups, often self-described as "civil guard" who are Trump's paramilitary section, have now come to the front line in order to secure Trump's second term at any cost. Even if it takes a civil war.

We estimated that in the worst-case scenario, Trump loses marginally and his "brigades" take action as they are forming a loony army, driven by racism, ultra-conservative ideas and far-right extreme conspiracy theories. And therefore, they will certainly question the result of the election in that case.

Yet, another, even worse scenario as it seems, came up lately. It has been analyzed by a DNC think tank also funded by Michael Bloomberg. As axios.comreported:
A top Democratic data and analytics firm told "Axios on HBO" it's highly likely that President Trump will appear to have won — potentially in a landslide — on election night, even if he ultimately loses when all the…
Post a Comment
Read more

At last: Nina Turner blows up the liberal machine, clearly pointing both neofascism and neoliberalism as the evils that the Left must fight until final victory

August 29, 2020
globinfo freexchange
It was about time. We thought it would take centuries until someone from the Left would dare to say the word "neoliberalism" inside the nest of the US liberal machine.
Nina Turner was meant to be the one who finally told the truth as clearly as she could:
Progressives are still on the mission, understanding very clearly that we got two dragons we got to slay. We got to slay the dragon of neofascism and slay the dragon of neoliberalism.

That is, in purely political terms and ahead of the 2020 presidential election, progressives will have to fight against two monsters at the same time: Donald Trump (neofascism) and the corporate Dems/never-Trump Republicans alliance (neoliberalism). It would be almost impossible to defeat them both, without their own independent political party.

In essence, progressives will have to fight both factions of the capitalist class that are now involved in a peculiar civil war behind the scenes.

As we ex…
3 comments
Read more

September 13, 2020
globinfo freexchange
It's time to find another definition for the current dominant "economic" system because it's not capitalism for sure. Call it, say, 21st century corporate feudalism, or whatever you like. We can now be certain that capitalism is dead.
Yanis Varoufakis describes this new, bizarre situation perfectly:
In Britain, the news came out that the economy had suffered its greatest slump ever – more than 22% down during the first 7 months of 2020. Remarkably, on the same day, the London Stock Exchange, the FTSE100 index, rose by more than 2%. On the same day, during a time America has ground to a halt and is beginning to look like not just as an economy in deep trouble but also, ominously, as a failed state, Wall Street’s SP500 index hit an all-time record.
Financial capitalism has decoupled from the capitalist economy, skyrocketing out of Earth's orbit, leaving behind it broken lives & dreams. As the UK sinks into the worst …
Post a Comment
Read more

Against the extradition of Julian Assange to the USA

August 30, 2020
DiEM25
Julian Assange has been imprisoned in the high-security HMP Belmarsh in London since April 11, 209, as he faces extradition to the United States, where he has been indicted on 18 counts for obtaining, possessing, conspiring to publish and for publishing classified information. With the first-ever use of the Espionage Act for a publisher, the indictment represents an unprecedented attack on press freedom around the world. For Julian Assange, who could face up to 175 years in prison, a conviction could be a death sentence.

August 29, 2020
Behind a veil of corporate media PR, the Gates Foundation has served as a vehicle for Western capital while exploiting the Global South as a human laboratory. The coronavirus pandemic is likely to intensify this disturbing agenda.
by Jeremy Loffredo and Michele Greenstein
Part 12 - A centralized stockpile to “make WHO dependent on the goodwill of Big Pharma”
In October 2019, the Johns Hopkins Center for Health Security hosted “Event 201” in partnership with the World Economic Forum and the Gates Foundation.
A former steering committee member of the Johns Hopkins Center for Health Security is now the Trump administration’s stockpile chief, and the CEO of Johns Hopkins Medicine is also on the board of directors at the pharmaceutical corporation Merck.
Event 201 was an exercise simulating the outbreak of a novel coronavirus. It included representatives from the U.S. National Security Council, as well as corporate leadership from drugmakers like Johnson & Johnson.
While similarities bet…
Post a Comment
Read more

September 11, 2020
globinfo freexchange
In 2017, CIA published online nearly 13 million pages of declassified records, including papers on the US role in overthrowing foreign governments and the secret 'Star Gate' telepathy project.
A peculiar 1998 memo (President's daily brief) from the archive (under the title Bin Ladin Preparing To Hijack US Aircraft and Other Attacks), proves that Clinton administration had already been informed about a potential al-Qaeda 9/11-style operation.
Key parts:
Reporting suggest Bin Ladin and his allies are preparing for attacks in the US, including an aircraft hijacking to obtain the release of Shaykh Umar Abd al-Rahman, Ramzi Yousef, and Muhammad Sadiq Awda.
One source quoted a senior member of the Gama at al-Islamiyya (IG) saying that, as of late October, the IG had completed planning for an operation in the US on behalf of Bin Ladin, but that the operation was on hold. A senior Bin Ladin operative from Saudi Arabia was to visit IG counterparts in the US soo…
Post a Comment
Read more

August 27, 2020
The Grayzone
Red Lines host Anya Parampil speaks with Ali Abunimah, co-founder of the Electronic Intifada, about the recent announcement that Israel and the United Arab Emirates plan to normalize relations. They discuss the conditions which led to the deal as well as what the agreement will mean for Palestinians, particularly those in the besieged Gaza Strip.

September 05, 2020
Seven years after the former National Security Agency contractor Edward Snowden blew the whistle on the mass surveillance of Americans’ telephone records, an appeals court has found the program was unlawful – and that the US intelligence leaders who publicly defended it were not telling the truth.
In a ruling handed down on Wednesday, the US court of appeals for the ninth circuit said the warrantless telephone dragnet that secretly collected millions of Americans’ telephone records violated the Foreign Intelligence Surveillance Act and may well have been unconstitutional.
Snowden, who fled to Russia in the aftermath of the 2013 disclosures and still faces US espionage charges, said on Twitter that the ruling was a vindication of his decision to go public with evidence of the National Security Agency’s domestic eavesdropping operation.
“I never imagined that I would live to see our courts condemn the NSA’s activities as unlawful and in the same ruling credit me for exposing them,” Snow…
Post a Comment
Read more

September 10, 2020
The day after the Bolivian election, the Organization of American States suggested the result was fraudulent — then took months to provide any proof. Last month, it finally released its data — and researchers at the Center for Economic and Policy Research found a basic coding error that destroys the OAS’s case against Morales.
by David Rosnick
Part 2 - Unjustly Forced Out
The damage, of course, had already been done. On November 11, 2019, Bolivia’s president, Evo Morales — his term not yet complete — stepped down from the presidency amid allegations of fraud. Decisive was the report from the OAS, which had just presented its preliminary findings in a binding audit of the October 20 election. These findings were not favorable to Morales, questioning his official first-round victory.
Members of the opposition, some of whom had been saying all along that Morales and his Movement Toward Socialism (MAS-IPSP) party would attempt fraud to stay in power, took to the streets in violent protest.…
1 comment
Read more