Who is behind Washington’s coup plot in Venezuela?

May 11, 2017
Creating a distorted image of the humanitarian crisis is the starting point. Painting a picture of a country on the verge of collapse is the alibi. 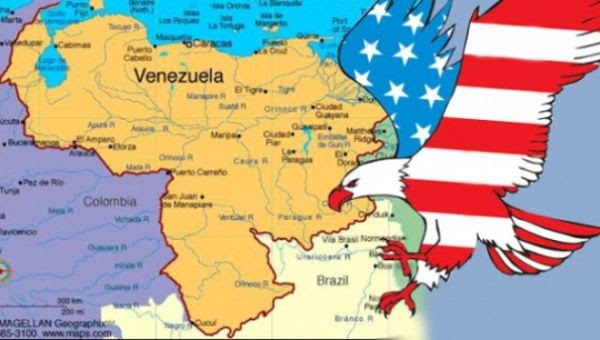 The coup plot against Venezuela has already been written and presented. On March 2, 2017, during the first round of OAS talks, Shannon K. O'Neil (Latin America director of the Council on Foreign Relations, CFR) presented the U.S. Senate Foreign Relations Committee with a portfolio of actions and measures to be taken by the United States if it wanted to remove Chavismo from political power in Venezuela.

Part 4 - How to Justify Intervention

The evidence presented by President Nicolas Maduro links leaders of Primero Justicia with financing vandalism against public institutions (the case of the TSJ in Chacao). What, beyond this specific case, reveals the very probable promotion of para-criminal, irregular and mercenary (allied and politically directed) factors to escalate and encourage violence in order to legitimize the position of the State Department.

The badly named MUD is a private embassy that works on the basis of the great economic interests of these factual powers, which are vital for its strategy to advance. Whether these strategies can keep pace with this global moment will depend on what their supporters can do on the ground. Given the resources of financial and political warfare applied by these powers (financial blockade, international diplomatic siege, programmed attack on PDVSA payments, etc.) and State Department maneuvers, are on their account, generating all the conditions of Pressure, siege and financing needed by its operators in Venezuela for the much-announced breakpoint that does not finish arriving.

And that it is necessary that it arrives for those who financed and designed this agenda.

Despite the tactics of the financial and political war (financial blockade, international diplomatic siege, programmed attack on PDVSA payments, etc.) and the maneuvers of the State Department, made on its behalf, to generate all the conditions of pressure, siege and investment needed by their Venezuelan operatives, the highly anticipated breaking point in Venezuela has still not arrived.

But for those who financed and designed the agenda against Venezuela, it is important this point come as soon as possible.

May 20, 2021
The Grayzone   In the feature-length documentary film "Killing Gaza," journalists Dan Cohen and Max Blumenthal documented Israel’s 2014 war on Gaza.  Yet this film is much more than a documentary about Palestinian resilience and suffering. It is a chilling visual document of war crimes committed by the Israeli military, featuring direct testimony and evidence from the survivors.
Post a Comment
Read more

May 21, 2021
Corruption and supposed efforts to reduce it have become a neoconservative weapon of choice with which to operate the controls on the funding sluice gates to acolytes of the U.S.-led international neoconservative empire.   by Oliver Boyd-Barrett   Part 5 - Poroshenko and Zelensky   Ukraine’s two presidents since the 2014 coup, Petro Poroshenko (2014 to 2019) and Volodymyr Zelensky (2019 to the present), each started with strong support that quickly waned. The country has scarcely improved. Gross National Product peaked in December 2013; unemployment has increased from 7% to over 10%; Ukraine remains the second poorest country in Europe per capita. Corruption, the supposed key force behind popular support for the elections of both Poroshenko and Zelensky, continues to be rampant. Kiev’s policies of stand-off with Russia have been dramatically counter-productive and have deprived Ukraine of Crimea and control of major industrial areas of the Donbass. Some 14,000 lives have been taken, 1.
Post a Comment
Read more

May 22, 2021
Under cover of the pandemic, Greece’s right-wing government has passed a slew of new measures to benefit the wealthy at the expense of workers, while massively expanding police powers. On the back of a decade of austerity, the latest laws are set to transform the country into a client state and playground for foreign tourists.   by Matthaios Tsimitakis/Mihalis Panayiotakis    Part 3 - Losing Control For more than six months now, practically all of Greece has been under strict lockdown and under curfew. Despite this, a deadly second wave mostly affecting the country’s north hit in the winter, and a third wave is now ravaging Athens, home to almost half the Greek population. Vaccination numbers remain relatively low due to the disastrous handling of vaccine procurement deals by the EU. Even now, the pandemic’s intensity shows no signs of abating. But even with the lockdowns — which offer diminishing returns and feed economic and psychological anguish — the health system remains on the ed
Post a Comment
Read more

As the Left wins big in Chile, neoliberalism is about to suffer another decisive blow

May 26, 2021
globinfo freexchange   Sepúlveda Allende, a grandson of Chile’s legendary socialist President Salvador Allende, spoke with Ben Norton about the historic May 15/16 elections in which left-wing and independent candidates won two-thirds of the seats for a convention to rewrite the constitution, which dates back to the military dictatorship of Augusto Pinochet.   Allende described the political situation in Chile after the fall of Pinochet's brutal regime. This is an interesting period because it  proves that what happened in the entire West, happened in Chile too.  As he pointed out: When the dictatorship ended, there was a kind of alliance made between the parties that historically had represented certain parts of the old left, like the Socialist Party of Allende. Another that was newly formed in that moment, which had not existed before the coup, called the Party for Democracy, which had (ex-President) Ricardo Lagos, and had a lot of power in that moment. There is also the C
Post a Comment
Read more

The other epidemic killing Americans

June 05, 2021
People are dying at record rates from opioid overdoses, and harm reduction advocates are asking the Biden administration to overhaul how it deals with the crisis.   by Michelle ChenTwitt  Part 2 - Turning a Corner Though the pandemic has aggravated the opioid overdose epidemic, the Biden administration has signaled a shift in Washington’s approach to the crisis. The massive American Rescue Plan stimulus bill includes a tranche of $30 million dedicated to harm reduction services. That’s a tiny fraction of the $7.6 billion the federal government spent on the opioid overdose crisis in fiscal year 2019. But Beth Connolly, project director of the Substance Use Prevention and Treatment Initiative at Pew Charitable Trusts, said that as the first explicitly targeted federal funding for harm reduction, “ it really is a message and a step in the right direction. ”  The harm reduction provision in the relief package could boost federal support for syringe service programs (SSPs), which provide cl
Post a Comment
Read more

May 23, 2021
Through his hallowed foundation, the world’s de facto public health czar has been a stalwart defender of monopoly medicine.  by Alexander Zaitchik Part 3 - The extent and ways intellectual property posed barriers to ramping up production Technically housed within the WHO, the ACT-Accelerator is a Gates operation, top to bottom. It is designed, managed, and staffed largely by Gates organization employees. It embodies Gates’s philanthropic approach to widely anticipated problems posed by intellectual property–hoarding companies able to constrain global production by prioritizing rich countries and inhibiting licensing. Companies partnering with COVAX are allowed to set their own tiered prices. They are subject to almost no transparency requirements and to toothless contractual nods to “equitable access” that have never been enforced. Crucially, the companies retain exclusive rights to their intellectual property. If they stray from the Gates Foundation line on exclusive rights, they are
Post a Comment
Read more

May 25, 2021
Double Down News   From death in Gaza to racism in the West, Lowkey exposes a very dark side of Israel.
Post a Comment
Read more

The billionaire class is a threat to Democracy

June 08, 2021
Since the pandemic began, America’s billionaires have seen their wealth skyrocket to an amount almost equal to a fifth of US GDP. This concentration of wealth is morally unacceptable — but it also represents a mortal threat to democracy.  by Luke Savage  It’s by now widely understood that the past twelve months have been a tale of two very different pandemics. Amid the countless stories of human misery buried in monthly unemployment figures, reports of widespread hunger, and tragic (though avoidable) deaths of frontline workers, COVID-19 has been a veritable bonanza for the tiny few at the commanding heights of the hyper-financialized global economy. Recent numbers published by the Financial Times underscore just how dramatic these gains have really been:                               Over the past two decades, as the global population of billionaires rose more than fivefold and the largest fortunes rocketed past $100bn . . . The pandemic has reinforced this trend. As the virus spread
Post a Comment
Read more