Many consider the European Parliament as the last defence line of the European people against the bankers and the corporate lobbyists who drag the Union deeper into the neoliberal undemocratic path, day by day, using the Greek experiment and the fascist regime of the ECB. 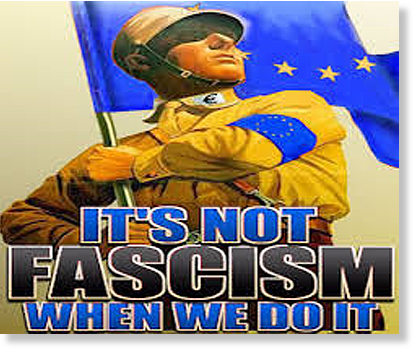 As reported by MintPressNews:

The European Parliament honored Venezuela’s right-wing opposition with its prestigious Sakharov human rights prize during a ceremony in Strasbourg on Wednesday. National Assembly (AN) President Julio Borges received the award on behalf of the opposition-controlled legislature and the country’s so-called “political prisoners”, to whom the prize was dedicated. “In the next few months, there should be a presidential election and we ask Europe and the free world to pay full attention,” he said in remarks during the ceremony.

Borges further accused the government of President Nicolas Maduro of having “kidnapped democracy, and installed hunger and misery.” The AN president’s visit to Strasbourg comes just days after the government’s landslide victory in December 10 municipal elections, which were boycotted by the largest opposition parties, including Borges’ own First Justice party. The main opposition coalition, the MUD, has been wracked by internecine strife since its surprise defeat in October 15 regional elections that saw the ruling socialist party take 18 of 23 governorships. Speaking at the ceremony, European Parliament President Antonio Tajani said the nomination of the Venezuelan opposition was in keeping with the EU’s commitment to defending democracy. “By awarding this prize, we defend the constitutions, the institutions, the separation of powers. And that’s the basis of democracy,” he declared.

The move has, however, sparked a backlash from parliamentarians on the left-wing of the EU legislature. “The decision of the presidency of the European Parliament to grant the prize to extremists of the Venezuelan opposition – despite criticisms from various Eurodeputies – is cynical and scandalous,” said German Left Party (Die Linke) Vice President Heinke Haensel, referring to Borges’ and other opposition leaders’ support for four months of violent anti-government protests that left over 125 dead earlier this year. Spain’s United Left (IU), for its part, led a boycott of the ceremony, accusing the EU Parliament of “putting itself on the side of violence in Venezuela instead of facilitating dialogue”. “The people receiving the prize today embody a violent opposition that since 2002 has sought to overthrow governments democratically elected by the Venezuelan people with coups,” the party said in a statement.

Additionally, IU slammed the parliament for passing over finalist Lolita Chavez – a Guatemalan indigenous Ki’che leader whose organization has been targeted by paramilitary groups – in order to give the award to Venezuelan opposition figures like Lorent Saleh, who “was jailed in relation to paramilitarism in Colombia”. “This year there are people who have not received the prize and fight precisely against what the people who are going to receive it represent,” the leftist party concluded.

The reaction by the Left shows that the political polarization inside the EU grows rapidly, which is natural, as the mainstream political parties (for now) - the Popular Right and the Social Democrats - have been fully occupied by the corporate lobbyists.

So, eventually, the European Parliament finally followed the corporate media propaganda of the West concerning Venezuela, despite that the democratically elected Leftist governments since the Hugo Chavez era, have repeatedly marked big electoral wins against the US-backed right-wing opposition.

The supposedly democratic European parliament totally ignored the atrocities made by the right-wing opposition followers and the economic war that has been launched by the US big oil cartel against Venezuela for years. The EU political establishment has been fully aligned with the Brussels bureaufascists, puppets of the elites.

Recall that recently, the Western propaganda on Venezuela completely collapsed by an independent expert on International Democratic and Equitable Order at the United Nations (UN), who visited Venezuela in late November to assess its social and economic progress.

Despite Brexit and the rise of the nationalists throughout Europe, the political establishment refuses to listen to the sirens of destruction. Together with the Brussels bureaufascists it is determined to serve the plutocracy at all costs.

Well, now you know who to blame for a possible, ugly dissolution of the European Union in the close future ...

June 03, 2020
An exclusive investigation by The Grayzone reveals new details on the critical role Sheldon Adelson’s Las Vegas Sands played in an apparent CIA spying operation targeting Julian Assange, and exposes the Sands security staff who helped coordinate the malicious campaign.
by Max Blumenthal
“I was the CIA director. We lied, we cheated, we stole.”

–Mike Pompeo, College Station, TX, April 15, 2019
Part 7 - A CIA front in Chinese territory?
By the time of the lawsuit, Adelson’s company appeared to have been working closely with the CIA. A confidential 2010 report by a private investigator contracted by the gambling industry pinpointed Adelson’s casino in Macau as a front for Agency operations against China.
“A reliable source has reported that central Chinese government officials firmly believe that Sands has permitted CIA/FBI agents to operate from within its facilities. These agents apparently ‘monitor mainland government officials’ who gamble in the casinos,” it stated.
Previously detail…
Post a Comment
Read more

June 02, 2020
The Hill
Protests near the White House escalated on Sunday amid the continued fallout from the killing of George Floyd, with images on social media showing multiple fires and scenes of rowdy crowds even as a citywide curfew had been imposed.
Sunday night saw the third straight day of protests in the nation's capital following the release of a video last week showing a white police officer in Minneapolis kneeling on the neck of the 46-year-old Floyd, an unarmed black man. Floyd died in police custody shortly after the video was taken.
His death has sparked increasingly violent protests across the country, from Los Angeles to New York, and has led Minnesota officials to charge the police officer in the video, Derek Chauvin, with third-degree murder manslaughter.